I'm a film historian, curator, broadcaster and consultant, and have been Anniversary Professor of Film and Media History at

Birkbeck College, University of London, since 1999. I have written and edited books on early film, Powell and Pressburger, Russian

cinema, Scorsese and Gilliam (further details elsewhere on this site); and worked on exhibitions ranging from Film as Film

programmes on cinema. These have included essays on Harold Pinter as screenwriter and on Bach as a film composer for Radio

Three, as well as interviews for The Hundred Scariest Movies, The Thirties in Colour (BBC4), Scotland on Screen (BBC2), Rude

Having been involved with pan-European media initiatives since the 1980s, I am currently a vice-president of Europa Cinemas and

member of its Experts Committee. I was elected a fellow of the British Academy in 1994 and in 2005-06 was Slade Professor of

Fine Art at Cambridge University, with a series of lectures entitled 'The Cinema Has Not Yet Been Invented'. Recent lectures have

included the first Richard Gregory Lecture for the Bristol Vision Institute at Bristol University ('What do we see in Films?'), the Nick

Burton Memorial Lecture at Christchurch University, Canterbury (‘Blind Spots: What about the History that's not on Screen?'), and

the 2010 Holden Lecture at Senate House, London University (‘Something Stirring in the Stack? Why filmmakers enter the

Library’). Details of recent conferences, symposia and presentations appear on the front page of thew website

As a member of the Steering Group of London's Screen Archives Regional Network, I launched the London Screen Study

Collection at Birkbeck in 2006, and currently serve on the UK Screen Heritage Programme Board. I am also an adviser to the  London

Film Museum, and a member of the Intellectual Property Office's advisory committee.

Current research interests include the history of production design, early (and new) optical media, the cultural impact of film in the digital

Ruiz, Aleksandr Sokurov, Patrick Keiller and some other notable individualists among filmmaking folk. 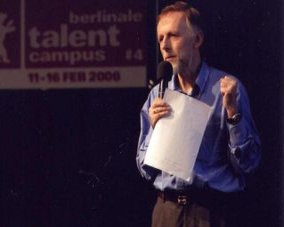 Back to... The Edge of the World, The Red Shoes and Peeping Tom 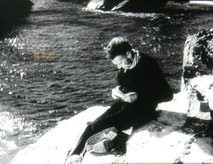 reappeared in Blu-ray format, with all

the extras from the BFI's earlier DVD -

and me, readings from Powell's book

of the film by Daniel Day-Lewis, and

Also new are the Criterion and ITV

Studios versions of Powell and

Pressburger’s The Red Shoes, both in

Blu-ray and DVD, and based on the

Criterion retains the original extras, with

interviews and commentary by yrs truly.

And Peeping Tom has also made the

transition to Blu-ray in a new Optimum

disc based on a recent restoration, with

Cinemas members at the Bologna

Cinema Ritrovato Festival, where we

discussed how to link the 'old'

experience of cinema with contem-

Happily this continues today, as the

Each Other: The Cultural Impact of

British Film, which explored how film's

'long tail' in digital media and the on-

cultural impact. This and a later

slides from presenting the report with

my co-authors Bertrand Moullier and

from scratch - and in Spain rather than

Jordan - with his art director Terry Marsh, for

the famous charge in Lawrence of Arabia.

his spectacular yet often unobtrusive

production design during a career that

stretched from the end of the British studio

system in the late1940s to the early days of

My book, based on interviews with John and

surveying his full career, was published by

Wallflower, with a grant from the David Lean

Another essay on production design appeared

in Conjuring the Real: the Role of Architecture

in 18th and 19th century fiction, edited by

A new essay on production design,

'Crafting Worlds: the Changing Role of

the Production Designer', will appear in a

-  A chapter on Russian documentary for the

BFI Companion to Documentary, edited by

-  A chapter in the Companion to Jean Renoir,

edited by Ginette Vincendeau and Alastair

-  An essay on early film accompaniment

practices in London, in a collection Sounds of

- An essay on the role of ancient-world epics

in developing cinema's new centrality in

Michelakis on The Ancient World in Silent

- My cointribution to the proceedings of the 2010

Domitor Conference in Toronto, on 'Film as

Twelve years  ago, after writing and co-producing a television series on early cinema and what led up to it - The Last Machine (BBC2, 1994) - I began to research the enigmatic figure of Robert Paul (1866-1943), who produced Britain's first commercial 'animated photo-graphs' in 1895 (in a controversial partnership with Birt Acres). Paul went on to help launch the British film industry before closing his studio in 1909, to concentrate on scientific instrument making.

My work on Paul has continued intermittently, with discoveries about his private life, viewing a remarkable original print of one of his films of Queen Victoria's 1897 Jubilee (top left) in the BFI National Archive, and curating a BFI DVD of Paul's extant films in 2006.

In November 2010, a visit to Stockholm allowed me to investigate Paul's visit in 1897. He was there at the invitation of the King, to install and demonstrate a film projector. He also shot a series of films of typical Swedish scenes, which are all lost but known from his sales catalogues.

What I discovered from the newspapers was that a programme of his films ran for three months in Stockholm at the Salon International, which means he must have trained an operator and left copies. Could they still exist somewhere?

Spurred on by this and other discoveries, I now hope to finish the long-promised book on Paul and the early moving picture business during 2017, in time to celebrate the 150th anniversary of Robert Paul in 2019.

The Art of Film: John Box

Some DVDs I've contributed to, with commentaries and/or booklet essays